Of all the cities in the United States, why did I choose Greenwood as the setting for Mississippi Justice? 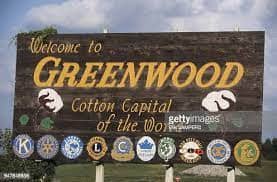 My mother and grandmother were born in Mississippi. They would often reminisce about country life. Their stories were mostly funny but sometimes sad, considering they suffered during The Great Depression and Jim Crow.

A few years ago, Mom decided that she wanted to go back to her birthplace, Sidon, a few miles from Greenwood. So, my sister and I planned a day trip from Memphis to Sidon. There wasn’t much to see in Sidon except miles of soybean and corn fields. Where was the cotton? Greenwood boasts on its welcome sign that it is the Cotton Capital of the World. “Oh, well,” Mom said nonchalantly. No love lost there.

Mom found the church school that she unsuccessfully tried to attend at age 4, when she tagged along with her older sister. She said the building didn’t look the same, and it was sitting the wrong way. Sure enough, a groundskeeper told us the original building had been destroyed by a tornado, and the new building was constructed in a different direction.

She looked for her younger brother’s grave in a cemetery adjacent to the school. He was killed by a car when he was 4 years old. She walked the length and width of that cemetery for the longest time reading headstones but couldn’t find one for him.

On the way to Greenwood, we got hungry and decided to eat lunch at a soul food restaurant. We sat at a table next to a group of White diners. Mom got a kick out of that. She never thought she would see the day when Whites and Blacks in Mississippi would eat side by side.

Greenwood, a predominantly Black city, was more interesting. It felt like I had stepped back into time – the 50s and 60s – as we drove through some parts of the city. A section of downtown has been revived with a world-class spa, cooking school, shops and restaurants. However, there are so many rundown houses and dilapidated buildings along desolate-looking streets.

In the 1960s, Greenwood was the epicenter of the civil rights movement. The Rev. Martin Luther King Jr., spoke at rallies. Freedom Riders came to town on Greyhound and Continental Trailways buses. And Stokely Carmichael gave his famous ‘Black Power’ speech in Broad Street Park.

We tried to find the street my mother lived on – Palace Alley – but it no longer existed. A utility worker told us where it had been located before being paved over decades ago. Mom had fond memories of living on Palace Alley with a host of aunts and cousins in nearby houses. Choosing Greenwood as the setting is an homage to my Mom. She passed away while I was writing Mississippi Justice.